Skip to content
Register for our Planting for Pollinators Garden Guide 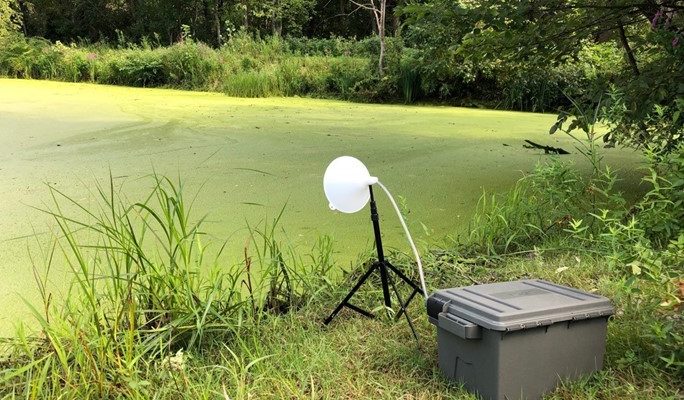 On a blustery afternoon in September 2019, the Land Council set up a pair of strange devices along the shore of Capaum pond. Each is made up of a small, watertight box with a clear hose running to a filter mounted on a small tripod. This tripod was set at the edge of Capaum pond, facing the turbulent wind and squalls rolling across the island.
These are prototype aerosol samplers. A battery inside the box powers an air pump. This air pump draws a specific volume of air per minute across a glass fiber filter mounted on the tripod. If any toxins escaped the HAB (Harmful Algal Bloom) occurring on Capaum Pond that day, we hoped to catch them with these little devices.
The samplers were left to do their work overnight, as storms riled the green waters of Capaum pond and fog blanketed the north shore of Nantucket. They hummed along all night, pulling air across the filter until they were retrieved the next day. The filters were carefully removed with gloves into sterile bags, placed on ice and flown to an off-island lab for toxin analysis. We had no idea what we were about to find. Capaum pond was producing two toxins in large amounts- microcystin and anatoxin-a. Microcystin was a common product of harmful algal blooms on Nantucket, and other off island researchers had captured it becoming airborne in the past. But anatoxin-a was a surprise, a less common toxin, and it was being produced in an amount that prompted the lab technicians processing our raw water samples to send us a message- stay away from Capaum Pond. NLC and the Conservation Foundation teamed up with the Town of Nantucket to get the word out that Capaum was unsafe for people and pets- we put up signs at access points, posted on social media, sent emails and notified abutters.
A few weeks later, the results of our aerosol sampling excursion arrived. Anatoxin-a was captured in trace amounts on our filter devices for the first time, ever. We shared excited messages back and forth with our research partners- Dr. Jim Sutherland, who oversees our pond water quality monitoring program, Mike Kelly and Vince Moriarty, whose expertise designed the aerosol samplers, and Amanda Foss and Mark Aubel of GreenWater Labs, who processed the filters in their lab.
We quickly told the Nantucket Conservation Foundation (NCF), owners of Capaum pond and its surrounding shores, and the real work began. There are many questions, perhaps more than before we captured airborne anatoxin-a. What does it mean? Is anatoxin-a becoming airborne frequently? Did we capture pure toxin, or did cyanobacteria become airborne, carrying the toxin it produced? Why is Capaum pond producing Harmful Algal Blooms, and can we use this discovery to help Capaum on the road to recovery?
NLC and our partners have been working closely with NCF to address Capaum Pond’s long-standing issue, eutrophication. Eutrophication is a fancy word that means there are too many nutrients in a body of water, and those nutrients are used up by aquatic plants like algae to drive massive algal blooms, some of which produce toxins. Capaum specifically, like so many freshwater ponds, has an overload of phosphorus which can drive the blooms of blue-green algae turning Capaum the iconic bluish green we’ve seen over the years. We have embarked on a campaign with the Conservation Foundation involving continuing water quality monitoring, an outside contractor to treat Capaum in the short term for these Harmful Algal Blooms, and extensive abutter outreach and watershed research to determine the sources of Capaum’s high phosphorus levels and plans to address it long term. Capaum hasn’t produced anatoxin-a at high levels since 2019, but it continues to produce other toxins and suffer from the effects of eutrophication. By continuing to monitor the pond’s chemistry, exploring the nutrient sources, and partnering with NCF and abutters we are working towards a long term solution for this beautiful coastal pond. We’ll also continue to set up the aerosol samplers when conditions are right- a HAB in progress, toxins being produced and windy weather aerosolizing the upper portion of the Capaum water column. As advocates for Nantucket’s natural resources, we at NLC will continue to fund, collect, and distribute research like this to help identify and address the environmental issues our island faces.